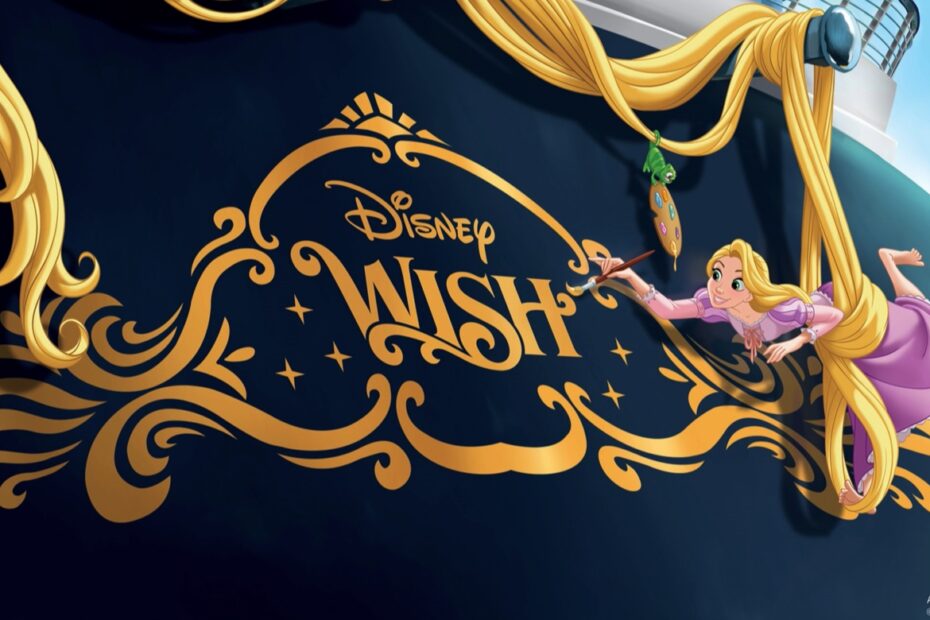 There’s something for everyone aboard Disney’s newest ship, the Disney Wish, setting sail June 9, 2022, and Disney just unveiled some new details about this amazing cruise experience!

When the Disney Wish sets sail in summer 2022, guests will be immersed in Disney’s rich legacy of enchanting storytelling. Disney is bringing to life the stories and characters of Disney, Pixar, Marvel and Star Wars adventures like never before.

To “Swim”-finity and Beyond
Disney is taking fun in the sun to the next level on board the Disney Wish with a brand-new family water attraction and three themed districts that offer dedicated space for families, children and adults alike.

Guests will be immersed in “The Wonderful World of Mickey Mouse” animated shorts aboard the first-ever Disney attraction at sea, AquaMouse. 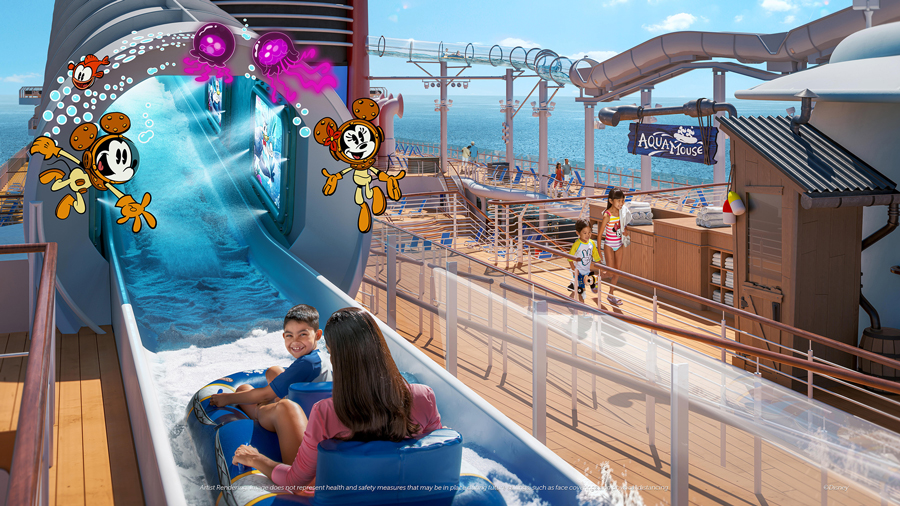 Complete with show scenes, lighting and special effects, and splashtacular surprises, this wild water ride is sure to delight everyone in the family as they zig, zag and zoom through 760 feet of winding tubes suspended high above the upper decks.

Families will have more pools, more deck space and more dining than ever before in an expansive district themed to Mickey and friends. In addition to AquaMouse, the area will feature six pools — spaciously staggered among tiered decks and surrounded by lounge chairs — and a fresh take on quick and casual fare with a festive character twist.

Little ones will delight in an all-new Toy Story-themed district designed especially for families with toddlers and young children. This whimsical water wonderland will include a splash zone, wading pool, family waterslide and smoothie bar.

Adults will indulge in sun-drenched serenity at Quiet Cove, a peaceful refuge dedicated to lounging, sipping and soaking. Set away from the bustle of family activities, this secluded adults-only district will feature a luxurious infinity pool, poolside bar and chic cafe.

Prepared and Served with Flair – A Culinary Cabaret
With the debut of three brand-new family dining concepts ranging from theatrical entertainment to cinematic adventure to sophisticated elegance, dinner on board the Disney Wish will be so much more than a meal – it will be a chance to interact with favorite Disney stories in exciting new ways. 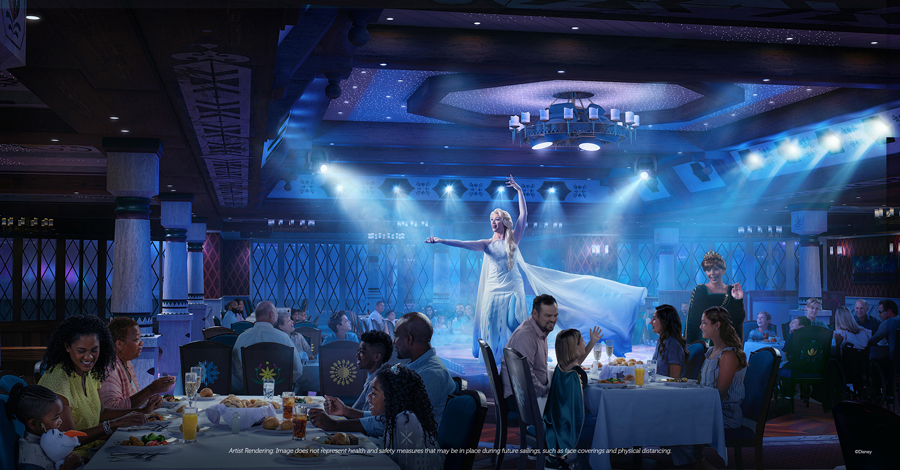 Worlds of Marvel is the first-ever Marvel cinematic dining adventure, where guests will play an interactive role in an action-packed Avengers mission that unfolds around them, complete with a worldly menu inspired by the Marvel Cinematic Universe.

1923, named for the year The Walt Disney Company was founded, is an elegant celebration of the company’s legacy, paying homage to the golden age of animation and offering a tasteful tribute to its Californian heritage with dishes inspired by the state’s unique fusion of cultural flavors.

A Whole New World of Family Entertainment
Disney is combining innovative design, technology and storytelling to create immersive entertainment environments that will surround guests in Disney stories in new and unexpected ways on board the Disney Wish.

The Grand Hall will evolve from a fairytale gathering space into an environmental theater through the magic of built-in special effects and the first-ever atrium stage on a Disney ship. Dedicated shows and interactive entertainment will come to life all around the hall, putting guests front and center as they play a special role in the magic.

Luna is a brand-new entertainment hub that will transition from a daytime setting for family fun into an elegant evening venue for adult-exclusive entertainment, offering a variety of live shows and interactive programming throughout the day.

Hero Zone is a futuristic sports arena where physical activity will blend with imagination during action-packed challenges and game show-style competitions for families to take on together.

The Wonderland and Never Land Cinemas are intimate screening rooms that will provide guests more options than ever to watch classic and first-run films from Disney, Pixar, Marvel, Lucasfilm and more.

Imaginations, Assemble! Cool Clubs for Kids of All Ages
Children ages 3 to 12 will enter the captivating worlds of favorite Disney stories in the reimagined Disney’s Oceaneer Club, a real-life wonderland featuring more spaces and stories than ever before. 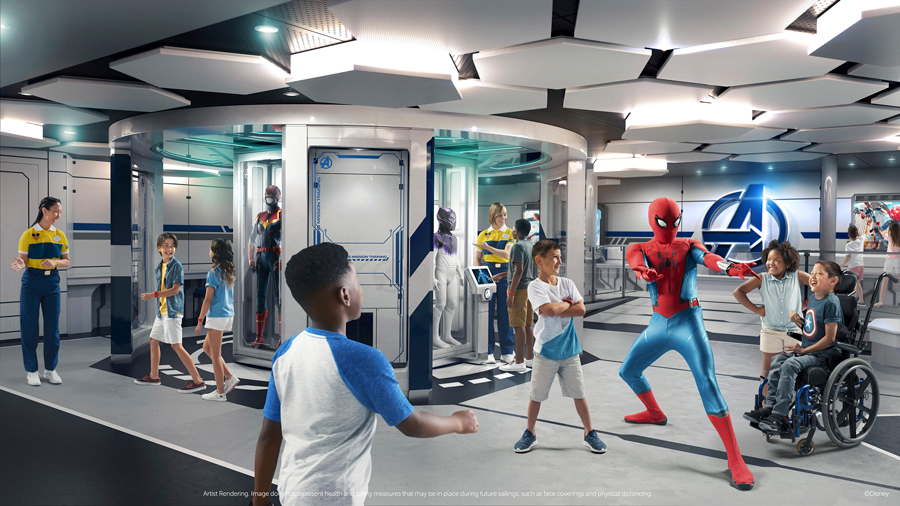 For the littlest cruisers ages 6 months to 3 years, It’s a Small World Nursery will offer babysitting services in a whimsical environment inspired by the beloved Disney attraction of the same name.

Edge (ages 11 to 14) and Vibe (ages 14 to 17) are trendy hangouts where tweens and teens will chill and play in their own way, with dedicated programming designed to engage the unique interests of these age groups.

A Trove of Untold Treasures Exclusively for Adults
For the first time on a Disney ship, guests will embark on a space-jumping tour of the Star Wars galaxy at Star Wars: Hyperspace Lounge, a high-end bar styled as a luxurious yacht-class spaceship. This richly themed, immersive experience will be reserved for adults every evening, offering interactive tasting experiences and signature beverages inspired by destinations such as Batuu, Tatooine and Mustafar. 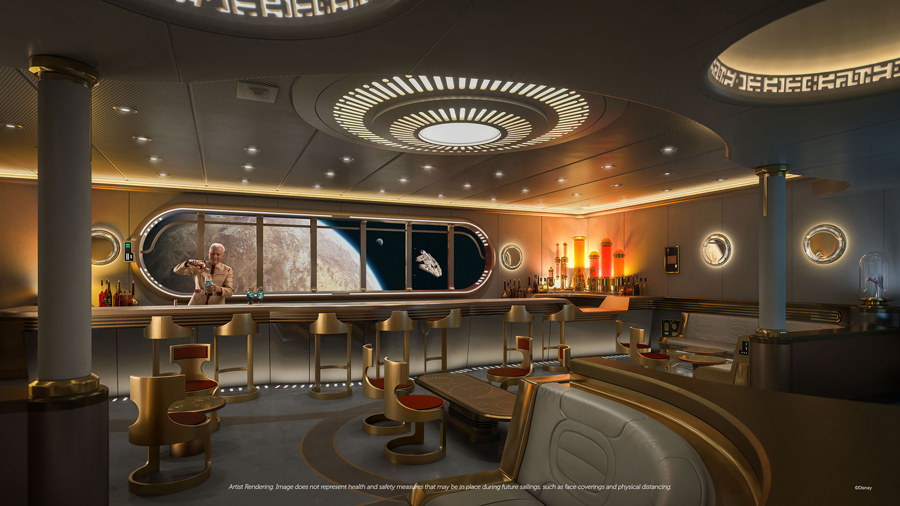 Guests will savor gourmet meals and exceptional beverages at an upscale suite of epicurean excellence exclusively for adults, inspired by the elegant icons of Walt Disney Animation Studios’ “Beauty and the Beast.”

Senses Spa is a tranquil oasis offering indulgent spa and beauty treatments, drawing on the serenity of natural elements to promote pampering and relaxation. The spa will feature private treatment rooms, lavish spa villas, and steam and aromatherapy rooms, while the reimagined Senses Fitness will offer state-of-the-art exercise and wellness facilities.

Other adult-exclusive spaces on board the Disney Wish will include the Quiet Cove pool district; a variety of gourmet cafes, relaxed bars and upscale lounges; and more.

Artful Accommodations Where Dreams Do Come True
With an all-new look and feel steeped in enchantment and inspired by dreamy Disney stories, every stateroom on board the Disney Wish will be a luxurious, peaceful retreat designed with ample room for families, plenty of storage and upscale amenities. Most will feature Disney Cruise Line’s signature split-bathroom concept for utmost comfort and function. 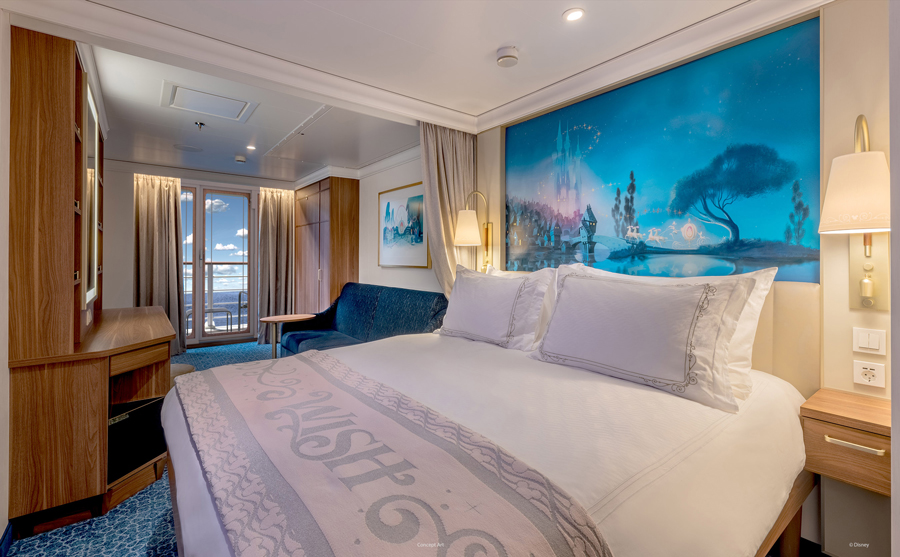 Most of the ship’s 1,254 staterooms will offer an ocean view — including 877 (70%) with a spacious verandah — and there will be 451 connecting doors that adjoin rooms to accommodate larger families.

The Disney Wish will elevate the concierge experience with more than double the number of premium concierge staterooms and suites, including Disney’s first-ever staterooms located above the bridge, boasting floor-to-ceiling windows that reveal breathtaking ocean views overlooking the bow of the ship. An exclusive lounge with private sun deck will be the perfect place for concierge guests to relax, sip a cocktail, and enjoy a premium level of dedicated service throughout the voyage.

The Disney Wish will also debut four royal suites – richly adorned, lavishly appointed suites that accommodate up to six guests and feature extravagant details and first-class amenities. These include a pair of two-story suites, the first of their kind within the Disney fleet, which will feature stunning statement pieces like an elegant spiral staircase and a spectacular two-deck-high stained-glass frieze.

Setting Sail Summer 2022
The Disney Wish will sail its maiden voyage — a five-night cruise to Nassau, Bahamas, and Disney’s private island, Castaway Cay — on June 9, 2022, followed by an inaugural season of three- and four-night cruises to the same destinations from Port Canaveral, FL. Bookings open to the general public on May 27, 2021, and to select guests on the timeline below.

Want to see more of the magic? Check it out here: Disney Wish Preview

**Due to the anticipated demand for the Maiden Voyage of Disney Wish, there will be some unique Terms and Conditions for this sailing only. Note that these do not apply to other Inaugural Season sailings – just the Maiden Voyage.

There are other restrictions on the Maiden Voyage to be aware of. No date changes will be allowed – Clients must cancel and rebook. For early bookings, the Castaway Club member must remain on the reservation. There are no discounts, and Clients may not use future cruise credit or onboard offers as payment for this sailing.

More details about the Disney Wish are on the horizon. Stay tuned!